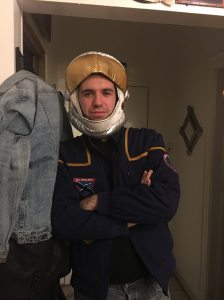 Most recently, Truant Arts gave Jonathan’s play PEAR & APPLE a staged reading. The Last Frontier Theatre Conference also selected his BREAKING/ORBIT to be performed in Valdez, Alaska in June. His comedy about the building of the atom bomb, CHAIN REACTION, was produced by Playsmiths as part of the 2012 NY International Fringe Festival. Jonathan is a co-founder of Playsmiths, a weekly playwrighting workshop. He holds an MFA in Playwrighting from Queens College. Aside from drama, Alexandratos is deeply involved in the world of comics, speaking at Denver Comic Con for the third time this year on the value of comic books both as an educational tool, and a social treasure. Along these lines, Alexandratos is working on a documentary, A BETTER UNIVERSE, about his father’s large, 1960s-era comic book collection and its emotional significance.